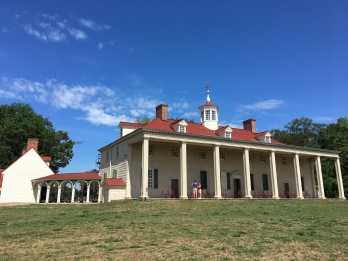 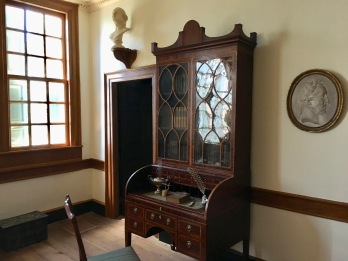 Too small for me to write on

Key to the Bastille in Paris (gift of Lafayette, brought by Paine) 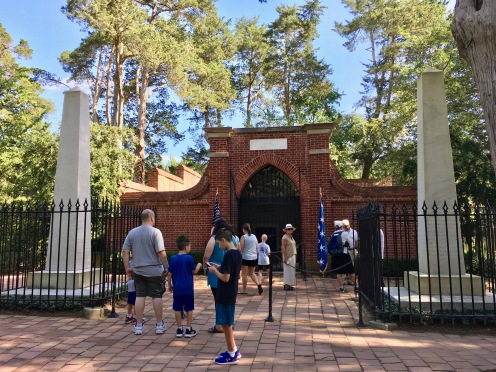 Not so crowded Slave Cemetery 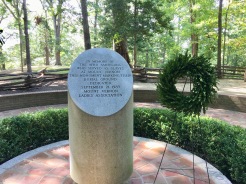 View of the Potomac River from the House

I was born and raised in Washington … the State of Washington.  Since childhood I saw images of George everywhere, from highway signs to the State Seal.  We used to go visit family living in Mount Vernon, WA, not too far from the border of Canada.

Then I married a woman who was born in Washington … District of Columbia.

We’re bi-coastal.  Both have some Washington in our blood.

I’ve been to the Nation’s Capitol, Washington, D.C. several times, overwhelmed by the history, images and “seat of power.”  Yet, I had never been to Mount Vernon, the nearby Virginia home of the first President.

So when we visited Virginia and Maryland recently, I spent the heart of the day wandering the grounds of Mount Vernon and taking the house tour.

I came away with my admiration for George and Martha intact, yet also a more enlightened understanding of the enslaved persons they owned.

Mount Vernon seems to do a fairly good job of presenting the facts:

“As a young man, Washington accepted slavery, but after the Revolutionary War, he began to question it. Washington avoided the issue publicly, believing that bitter debates over slavery could tear apart the fragile nation.

He made his most public antislavery statement after his death. In his will, Washington ordered that his slaves be freed at his wife’s death. Unfortunately, this applied to fewer than half of the people in bondage at Mount Vernon.”

Walking to George and Martha’s tomb, the area was crowded.   A short distance away, a quiet “slave cemetery” where there were no crowds.  In fact, I was alone for a while, honoring the memory of those women, men, children owned by our Founding Father.  I stood silent in the beauty of the forest sounds.

How do we learn the truth about America?

We take an honest look at our history.

Some refuse to look or listen.  They can’t face the facts.

Another fact to face:  I was just reminded that Francis Scott Key who wrote our National Anthem, was a slaveholder too.

“A religious man, Key believed slavery sinful; he campaigned for suppression of the slave trade. “Where else, except in slavery,” he asked, “was ever such a bed of torture prepared?” Yet the same man, who coined the expression “the land of the free,” was himself an owner of slaves who defended in court slaveholders’ rights to own human property.  Key believed that the best solution was for African-Americans to “return” to Africa—although by then most had been born in the United States.”